You're not supposed to be here.

The opinions of a challenge-oriented, courageous, creative and curious youth in transition to becoming an adult. WARNING: I am not for the FAINT-HEARTED

People these days want respect. For what they do, what they say, who they are and who are they trying to be… but really, if you want others to respect you, as my elementary teacher used to say, we have to give respect first. 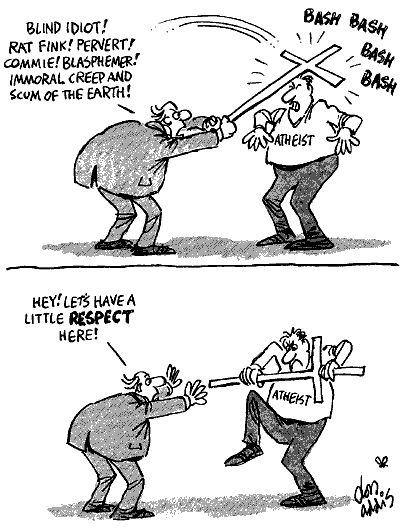 We can’t tell people what to do, let them choose for themselves… You are not living their life anyway.

You can’t make them be in the same religion you are in or convert to your religion just cos you want them to… for what is the slimy, soft, tangled intestine-looking thing that is floating inside our heads if we have someone use theirs instead.

I don’t see why people are stressing out about religions… the way I see it, if I like a person, I just like him. I don’t go asking people stupid questions like, “I want to be your friend, but before that can I ask you something, are you a christian? Cos if not… then we can’t be cos of a certain social policy.”

If I become friends with a Pagan, I’ll be proud of it! I’ll join him/her worshiping trees and water!!! Hell I care if people give me the, “Aren’t they a stupid bunch” kind of look, like I care what they think.

Same way, I think my friend would like a trip inside the church sometime and see how people worship stones and listen to words of GOD — as if we know what we’re talking about.

I’m a Catholic and proud of it.

I go to the church even if there’s no reason. It’s my sanctuary. Not because they have good ventilation and lighting but because, it calms me. I listen to the words of the lord — what it actually says, not the words coming out of the readers mouth but more than that — in a foody person’s term, it’s the aftertaste I’m tasting cos that’s the base.

After a very tiring day, I noticed two people arguing whose religion is better — I’d like to remind them that they are worshiping the same God but they were talking about words in a book that was written by humans so, I didn’t bother.

In fact, I don’t think I’ll do that even, and no, I won’t act cool by saying, I want them to figure it out for themselves but, truth be told, I’m passive in arguments.  I was told to stay put and listen to conversations and arguments — that involves me and answer only when asked.